Olha has always been a most enthusiastic, energetic, and highly-principled partner.

She has been attentive to details of mutual projects and demonstrated leadership and mentorship in her capacity as Director of International Projects. I was impressed with her quick adaptation to the various meeting environments and substantive contributions in the discussions.

While working at Danone Ukraine as Government Affairs Manager Olha Bosak proved to be a reliable, self-motivated and result-oriented person with a strong identity. Olha is very dedicated, enthusiastic and takes initiative. She is open to new experiences, and very much wants to be successful in whatever she does.

She is an extraordinarily gifted individual who strives for excellence in every task set before her – and achieves it! I have no doubt that Olha will not only succeed at whatever she puts her mind to, she will always be a welcome member of any team of effort – whatever the project.

Olya, there is a great future ahead of you in this field as well (playing golf)! Congratulations on your debut on the playing ground!

Founder & CEO of Olha Bosak Management Consulting, Business Partner, Board Member, Founder & Leader of several organizations, initiatives, campaigns and networks. The winner of 2019 energy industry award Woman of the Year of the Ukrainian Energy Industry in the nomination Business Leader of the Year.

She has been building strategic expertise throughout her career. After almost two decades of her continuous progression and achievement, including 15-plus years in leadership positions, she was selected by Norwegians to serve on the Board of Directors of a Norwegian energy company AICE Hydro and by Austrians to foster the development of the Ukrainian-Austrian Association as a member of the Supervisory Board. 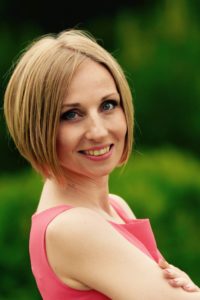 Olha Bosak graduated with honors from Dobromyl high school and Lviv Junior Academy of Sciences, where she studied physics. In Lviv, she received two degrees: Management-Economics at Ivan Franko Lviv National University and Philosophy-Theology at Ukrainian Catholic University. After receiving the first scholarship for her studies abroad, with opportunity to further develop and expand her horizons, studied during one year in Austria. She participated in the Aspen Leadership Program.

While working, participated in fellowship programs abroad and received certificates:

In 19 years founded a charity organization Vidlunnya, which works effectively till now. In 23 years, because of successful implementation of the first all-Ukrainian action Christmas Together, which year after year – with an aim to unite Ukraine – used to bring together young people from different regions, received from the President of Ukraine Viktor Yushchenko a proposal to work at the Administration of the President of Ukraine. First Presidential Hearings Challenges Generated by Freedom, which were coordinated by Olha Bosak, led to the involvement of various institutions of civil society into the public policy development and implementation in Ukraine.

In 25 years Ms. Bosak was appointed as Director of International Projects at the National Academy of Public Administration, Office of the President of Ukraine. Directorate, which she was chaired, initiated and implemented international projects that contributed to the involvement of best international practices for the implementation of democratic governance and public management reform in Ukraine.

Prior to launching her own consulting business she worked at German consulting company GIZ. Ms. Bosak was a member of Working Group on preparation of draft strategy of public finance management system development, mandated by the Ministry of Finance of Ukraine. As an OECD Consultant in Ukraine she provided consulting support in such target sectors as alternative energy and energy-efficiency, agribusiness, machinery and manufacturing.

She has experience in strategy development, building competitive advantages through GR and marketing, execution of business development initiatives. Has more than 15 years of management experience including working with large international companies. Has worked in the Administration of the President of Ukraine, with Ministries, international organizations, financial institutions in Ukraine and abroad. She has worked with several companies where she provided consulting services for a wide range of industries.

Olha Bosak has succeeded to make a contribution to mitigating challenges Ukraine’s energy industry was dealing with. Has provided advisory services to improve the prospects of investment in oil and gas, electricity and renewable energy. During 2017-2018, worked with the Ukraine’s largest energy company Naftogaz Group as a Director of the Center for Reforms of Oil & Gas Sector and Corporate Governance of SOEs. Working on the team of the Deloitte project on the reform of the natural gas market, she contributed to the improvement of the investment attractiveness of Ukraine’s oil and gas sector. She was involved in corporatization of the Ukraine’s National Nuclear Energy Generating Company Energoatom as an adviser on sustainable development.

She initiated specialized forums Ukrainian Financial Dialogue and Ukrainian Oil & Gas Dialogue, that aims to strengthen dialogue and cooperation between the government officials, politicians, businesses and general public. She initiated Energy Salon XXI Why Are Renewables Great for the Environment, and held it in partnership with Norwegian companies Scatec and NBT, and the world’s largest law firm Dentons.

Olha’s achievements outside of business have a positive impact on change across different communities. Not only throughout her professional career but also during her studies at Universities, she has implemented many social business responsibility, sustainability and community relations projects. While implementing her initiatives she used to work in partnerships with large international companies, business associations, embassies and ministries.

In New York, with a view to promote human rights, democracy and the rule of law she launched internationally her Live Free public diplomacy project at the UN General Assembly Building. She delivered public talks in New York, Ottawa and Toronto emphasizing on the importance for the strong inter-country cooperation and the involvement of the global community in the resolution of conflicts and preventing aggression. As the Founder of Young Democracy Club, an informal network of proactive Western educated Ukrainians, contributed to raising awareness about important issues for Ukraine’s democratic development. Young Democracy Club launched effective engagement of Western educated Ukrainians into the development of good governance in Ukraine. As the Founder of Ukrainian Freedom Fund, in addition to participating in humanitarian initiatives, she sought to influence changes in Ukraine’s defense policy-making. The Ukrainian Freedom Fund has implemented projects aimed at combating corruption, strengthening the rule of law and building democratic institutions as well as provided assistance in setting up the Office of Reforms under the Ministry of Defense of Ukraine in 2015.

Olha Bosak is co-author of two books on public management reform in Ukraine, author of articles that raise important management and energy issues. She used to be actively involved in representing Ukraine at international meetings, congresses and forums. She was the youngest speaker at 16th Economic Forum in Krynica.

In the past years Olha has also developed a distinguished international career as painter. Her artworks were on display in Ukraine, Austria, Italy, France, the US and Canada.