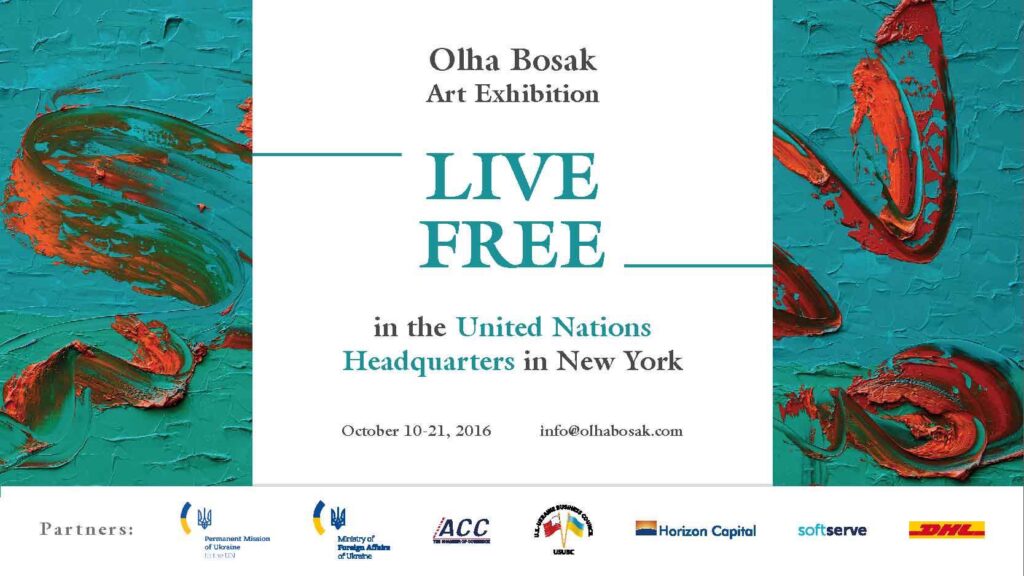 Olha Bosak was invited to present her Live Free art collection at the headquarters of the United Nations in New York in October 2016. Olha’s poignant and powerful portrayal of the spirit of the Ukrainian Revolution of Dignity has impressed many people in Ukraine. She launched this public diplomacy project internationally. After displayed at the United Nations General Assembly building in New York, the exhibit moved to Ottawa and Toronto with the hope of furthering awareness of this massive public action during the winter of 2013-2014.

The idea of the project is to promote an image of the new Ukraine. The goal is to further demonstrate to the global community the importance of the Revolution of Dignity for Ukraine, and how Maidan continues to shape and inform public opinion in Ukraine, including the desire to live free as an independent nation and society. Events that have occurred since the beginning of the XXI century in Ukraine tend to prove that there is a big need for the strong inter-country cooperation and the involvement of the global community in the resolution of conflicts and preventing aggression. While each country in the world needs to focus on its own problems, the world community must stand up to aggression to prevent the spread of global instability.

Olha also delivered public talks about current developments in Ukraine in New York at the UN General Assembly Building, in Ottawa and Toronto.

Olha first launched her Live Free Art Exhibition in Kyiv in January 2016. This project was implemented in cooperation with the Hungarian, Austrian and German Embassies in Ukraine. The inspiration for this latest “Live Free!” collection of artworks came from Ukraine’s struggle over the past three years to shed the country’s Soviet past and to return to Ukraine’s European roots. Olha chose to call this art collection “Live Free!” to reflect the hopes and dreams of her country. In war time, in her artworks, Olha Bosak tries to show the great desire of many Ukrainians to live free.

She explains: “It took years to achieve such a high development level of Ukraine’s civil society as it attained during the time of the Revolution of Dignity. During 1990s not many people knew what NGOs were, and why there is a need for charitable organizations. During Soviet times it was suggested that the state was taking care about everything and for everyone. There is always somebody who thinks, that people just have to execute the tasks assigned by the higher powers ruled by Communist political party. Many years were spent to ensure Ukraine would return to its pre-Soviet mentality. And currently one may observe that the European values inherent to our land are being practiced again. During the Revolution of Dignity the main thing we have learned is that people’ demands will be met due to the power the united society demonstrates.”

Live Free Art Project in the US and Canada was implemented in partnership with the Ukrainian Mission to UN, Ministry of Foreign Affairs of Ukraine, Embassy of Ukraine to Canada, Canada Ukraine Foundation, American Chamber of Commerce, US-Ukraine Business Council, Horizon Capital, SoftServe, and DHL.

Olha owes her love for beauty and art to her father, for whom she painted her first oil artwork when she was 26. The painting made the father happy – from childhood, he contributed to the development and realization of Olha’s creative potential.

She studied at the Salzburg International Summer Academy of Fine Arts in Austria. The Academy was founded by Oskar Kokoschka as the School of Vision in Hohensalzburg Fortress, which is the oldest of its kind in Europe. Olha’s artwork was noticed in New York and published in the book «International Contemporary Artists», as well as on resources of «Art Takes Manhattan».

Her artworks were on display in Ukraine, Austria, Italy, France, the US and Canada. In Kyiv, she held two personal art exhibitions «Live Colorfully!» and «Live Free!» that was implemented in cooperation with German, Hungarian, and Austrian Embassies. In Milan, she was selected to be part of an artistic project «Woman’s Essence» that represents the contemporary worldwide women artists and presented her art. In Paris, she was awarded with «Woman ART Award 2017».

Her personal art exhibitions took place in New York at the United Nations General Assembly building, Ottawa and Toronto. Her paintings are constantly on the temporary exhibitions in the offices of private companies and are in private collections in Ukraine, Austria, Italy, France, Norway, the United States and Canada. 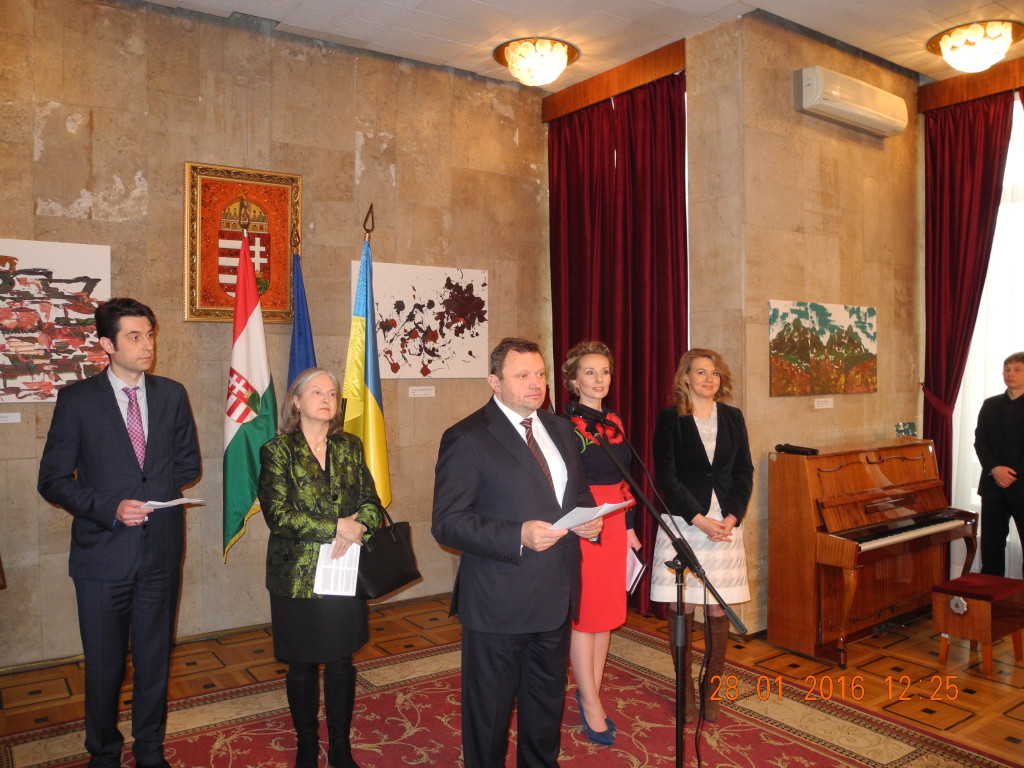